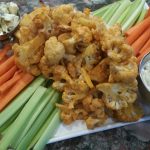 It’s amazing how some foods seem to pair so perfectly with certain events – like that box of popcorn in the movie theater, the candy apples on a stick at the carnival, or the big tower of cake at any wedding. For many sports fans no gathering is complete without a batch of Buffalo Wings within the food mix. But with all that saturated fat and salt, traditional Buffalo wing recipes can be far from heart-healthy.

This Buffalo Cauliflower recipe gives you the best of both worlds – a spicy, flavorful treat that is also more heart-friendly. There’s much less saturated fat (especially if you leave out the butter entirely), it’s and lower in sodium than traditional Buffalo wings. It’s also nice to have a homemade buffalo sauce on hand of which all of it’s ingredients you can pronounce.

I like to serve this dish with typical Buffalo wing sides: raw carrot and celery sticks and a bit of crumbled blue cheese. But even all on its own, this Buffalo Cauliflower is quite tasty. The Chili peppers give it a really nice heat.

If you want, make the Buffalo sauce ahead of time. Store it in a sealed container in the fridge for up to 6 days. Also, for this recipe you will need to use only about 1/2 of the sauce. So, there will be plenty leftover to turn just about anything Buffalo throughout the week! Toss the extra Buffalo sauce with more roasted cauliflower, or with chicken breasts, shrimp or tofu, or use it as a dip with your favorite corn chips or toasted tortillas.

PREPARATION
Preheat oven to 375 degrees. Add tomatoes, red pepper, onion, garlic and cayenne pods to a medium roast pan and toss with 1 teaspoon of olive oil. Cook for 1 hour, or until red pepper is soft. Peel and seed red pepper, discarding its peel and seeds. Add roasted veggies, water and salt to blender and blend smooth. Slowly drizzle in 2 tablespoons of olive oil while continuing to blend. Blend in the butter (or slowly drizzle in additional 3 tablespoons olive oil).

Toss the cauliflower with 1 teaspoon olive oil in a large roast pan. Lightly season with salt. Cook in oven 20 minutes, or until cauliflower is slightly softened. 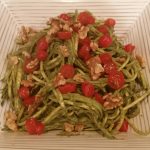 Disclaimer: I received free samples of California walnuts mentioned in this post. By posting this recipe I am entering a recipe contest sponsored by the California Walnut Commission and am eligible to win prizes associated with the contest. I was not compensated for my time.

Summertime is a perfect time for getting active outdoors. Nothing beats a long day of hiking, biking or group sports out in the warm sun and fresh air.  On these high activity days I often find myself craving a hearty meal, yet don’t want to fill my kitchen up with a bunch of heat from the stove.

This dish is a perfect and simple solution to this dinner dilemma. The Creamy Walnut Pesto sauce is so rich and satisfying, and everything- even the noodles- need no cooking!

“Zoodles” is my name for zucchini noodles. Making them is super easy if you have a spiralizer peeler. This fun, timesaving tool has blades that run in two directions. With it, you can cut out perfect noodle strips with every slice you make. Serve the zoodles uncooked so that they have a nice al dente texture. Making summer pasta will never get easier than that!

I love using walnuts in my pesto because I know they give my dish a big boost of Omega-3 fatty acids. Omega-3s are anti-inflammatory, and especially beneficial on a long, hard day of exercise and play. Just one ounce of walnuts has 2.5 grams of Omega-3 alpha-linolenic acid (ALA) Bonus: they taste delicious in it too. Now that’s something to get nutty over.

PREPARATION
To a high-powered blender add the 1 cup walnuts plus the basil, garlic, and Parmesan cheese. Blend on high, using a damper to help feed in ingredients as needed. While blending, slowly add in the olive oil. Blend until all the basil is chopped and you have a creamy sauce consistency. 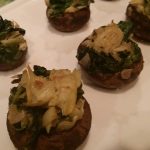 For gatherings big or small, often the perfect party dishes come in little packages. Small bites are done right when packed with big flavor. It’s much so easier for your guests to mingle around with a little plate of goodies versus a big dinner dish.

Stuffed mushrooms are a definite party favorite, but their fillings are often not very heart-friendly. Fortunately, there are ways to make delicious mushroom appetizers without all the added saturated fat. Here we chose to stuff the savory mushrooms with flavorful, heart-healthy veggies. The red pepper flakes add a little nice heat to each bite as well.

When prepping the mushrooms, do make sure to save the stems so you can later add them into your next vegetable stock.

Planning on using plain, and not marinated, artichokes for this recipe? Then I recommend you add a 1/2 tablespoon vinegar to your saute pan while as you are cooking the shallots and spices. But the marinated artichokes will give you the most flavor, so do try your best to use those instead.

Have a big crowd coming over? This recipe can easily be multiplied.
Bonus: There’s no such thing as eating too many of them!

Carefully remove the stems from the baby portobella mushrooms. With a small spoon, gently scrape gills out from the underneath of the mushrooms. lightly baste outside of mushrooms with 1 teaspoon of the olive oil. Set aside.

Add the second teaspoon of olive oil into a heated saute pan over medium high heat. Add the red pepper flakes, smoked paprika, dried mustard and shallots and saute until shallots are softened, about 2 minutes. Add baby spinach and saute until the spinach is softened, about another 2 minutes. Remove from heat and stir in the minced artichoke. Lightly season with salt and pepper.

Stuff mushrooms with the artichoke/spinach mixture, making sure to pile the filling high for each bite. Bake mushrooms until mushrooms are fully cooked, about 15-18 minutes.

Plate the stuffed mushrooms, making sure to drizzle some of the liquid on the bottom of the baking pan onto each bite. 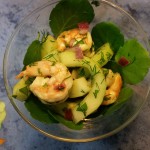 One of the best things about summer is shopping the farmer’s markets. It is such a treat to have so much local produce readily available. It’s especially nice when you live in a city like New York, where housing usually doesn’t leave much room for plant growing. Here, living spaces larger than a closet are considered expansive!  Alas, I do not live in such luxury… :/

Every Tuesday there is a lovely little farmer’s market that springs up right by NewYork-Presbyterian’s Columbia University Medical Center. During my lunch break I always make a quick stop over and pick up some freshly harvested goodies. (Someday I will have a little room to grow my own again – thank goodness for Farmer’s Markets until then!)

As fruits and vegetables age, they can lose some of their nutritients. So buying and preparing locally grown foods helps you get the most nutrition bang out of each delicious, healthy bite.

This week there was an amazing deal on cucumbers – 3 for $1.00! (Who says healthy eating is too expensive?!?!) I also grabbed a fragrant bunch of dill, parsley and purple spring onions. I was on my way to making one delicious cucumber salad.

The shrimp I used were not not natives to NYC . They came from Ecuador.  Says they were “sustainably” raised on the bag, but – who knows?!? Nonetheless, they co-mingled with the veggies quite deliciously in the mixing bowl.

With all the light pastel colors, this salad is very pleasing visually. I also like how the way the cucumbers are sliced mimics the curves of the shrimp. The light, lemony sauce makes for delightful dining on a hot summer day.

PREPARATION
Slice the cucumbers lengthwise so you have two long halves. With a spoon, carefully scrape out all the seeds from the center of the cucumbers. Slice the cucumbers into 1/4″ slices and toss into a mixing bowl with the shrimp, onion, dill and parsley.
In a small bowl, add the lemon juice, honey and sea salt. Whisk the dressing as you slowly pour in the olive oil.
Pour dressing over salad. Toss to mix everything well.

Serve salad over the fresh watercress.

Fruity Guacomole
Recipe Redux – April, 2015: What hiding in the cupboard?

This post is especially exciting for me, as it marks my very first written as an official, card-carrying Registered Dietitian Nutritionist! That’s right, after many years of school and internships and late nights studying, I finally sat for my RD exam for the first time last week and, as as luck would have it, I passed. Very excited to be a part of this great group of nutrition specialists.

For this month’s Recipe Redux challenge I decided to really “fruit it up”, as my cupboard contained a can of pineapple, fresh apples, and some really ripe avocados all ready for the using.

This guac is great served with baked corn chips or veggie sticks, or you can serve it alongside grilled fish or chicken. Other fruits could work well in it too, like mango, peaches or apricots. You can also use a variety of apples.  Add scallions for extra bite. Tip: Make sure to add the spoonful of lime on top before refrigerating so to keep your guacamole from turning brown.

This recipe makes a big batch, so do be sure to share with friends and family! 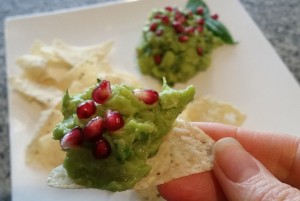 PREPARATION
Into a large mixing bowl add the avocados, cumin, salt and pepper. Also add all but a spoonful of the lime juice. Mash the avocado with a fork until creamy. Add the jalapeno, apple, pineapple, cilantro and basil to bowl and stir to mix well. Place in a serving bowl and drizzle the reserved spoonful of lime juice over the top.  Sprinkle with pomegranate seeds and refrigerate 3-4 hours. Serve chilled. 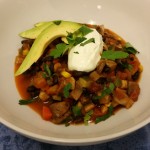 Looking for a tasty, healthy dish to shake off that winter chill? Nothing heats things up better inside than diving into a hot, spicy bowl of chili. My version here is bursting with veggies and spices. It’s also great served over brown rice, quinoa, millet or any other delicious whole grain. This recipe is for about 10 servings, and, as long as you have an extra-large pan, you can easily double the recipe with success to feed a really large group.

If you want to keep things mild, do not include the jalapeno seeds. For medium heat, through in about 1/3 the seeds of one jalapeno pepper. Want the painfully hot firehouse-hot chili? Then throw in even more jalapeno seeds and double the cayenne pepper- oh my, lookout!

DIRECTIONS
In a large pot heat the olive oil. Add the chopped onion, bell pepper, carrot and jalapeno (plus the seeds if using) and saute over medium-high heat about 6 minutes, or until the onions become translucent. Add the spices and cook another 2 minutes, stirring well. Add the corn, zucchini and mushrooms and cook another 7 minutes, stirring often. Add in the tomatoes with its liquid, black beans and water and bring everything to a boil. Reduce to simmer and cook 20 minutes.

To garnish, top with 1/2 tablespoon sour cream (if using), a few slices of avocado and 1/6 of the cilantro.