What exactly is a serving size?

How much is just right?  Everyone has heard by now that, whether dining out or eating at home, the average American’s plate is often filled with over-sized portions. But what exactly is a proper serving size? Here is a handy, quick guide comparing  single-sized  food portions to everyday items:

3 ounces of poultry, beef or fish ~ a deck of cards, or a checkbook

an ounce of nuts ~ about a handful

1 ounce cheese ~ a pair of dice

Another way to roughly estimate portion sizes is by using your hand (of course, make adjustments accordingly if you are way above or below average-sized!):

About one cup~ your fist

About 1 ounce meat or cheese~ your thumb

About 1 tablespoon ~ your thumb tip

About 1 teaspoon~ your fingertip

Make sure to take the “What to Eat: Personalized” quiz to learn exactly how many servings from each food group (Meats and Beans, Grains, Fruits, Vegetables, and Dairy) is right for you.  Knowledge is power.

Concassee Tomatoes are easy to make, and are great to use in soups, stews and sauces.

Cut an “X” on the bottom of each tomato.

Both the grilled peppers and cauliflower rice can be made ahead; just make sure to refrigerate until ready to use. Plan to not cook the asparagus ahead of time- that way you won’t lose its vibrant green color. 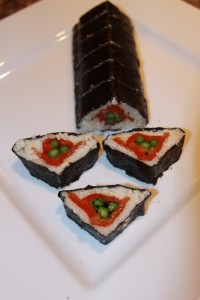 Steam asparagus until al dente, about a minute. Throw asparagus into ice bath to stop cooking; remove from water.

Place cauliflower, mirin, simple syrup and rice vinegar into food processor. Chop until cauliflower pieces are about the size of rice grains. Stir in sesame seeds.

To assemble: Place 1 nori sheet on sushi mat. Thinly spread cauliflower mixture over nori sheet, leaving a 1/2 inch “lip” of one side bare. Place a row of basil leaves in middle of cauliflower (running parallel to bare lip.) Lay some pepper strips on top of basil leaves. Lay 3 steamed asparagus stalks over pepper, allowing the asparagus heads to extend beyond the end of the roll. Take three more asparagus stalks and trim to fit the space left at the end of the first three stalks, again allowing for some length so that the asparagus tips will stick out of veggie roll end. Roll mat slowly toward “lip”; wet bare Nori lip with water and rub onto roll to seal.
Dampen a chef’s knife with a moist cloth. Carefully slice roll into 6-8 pieces. For easier cutting, make sure to clean and re-moisten blade with damp cloth in between each slice.

*use wheat-free soy sauce or Tamari if preparing gluten-free

Red beets really give this dish a great look since, as the dish roasts, the red color transfers onto the edges of the other vegetables. If you don’t like beets, you can omit them (of course, then the dish will not live up to its “Roasted Red” name.) I do suggest cutting the sweet potato into larger sized pieces than the other vegetables since its cooking time is less. I also suggest wearing gloves when handling the beets so your fingers are not red during dinner.

Place vegetable mix in a roast pan along with the 1/3 cup of stock. Roast vegetables until tender (but not mushy), about an hour, making sure to toss vegetables occasionally during cooking and add more stock, 1/4 cup at a time, as needed.

Season with to taste and serve warm.

Black Rice is also known as Forbidden Rice. Black Rice Pudding is a common breakfast dish in many parts of Southeast Asia. Using coconut water instead of the traditional coconut milk greatly reduces the dessert’s fat and calorie content, while still adding big flavor. This dessert is a deliciously easy way to eat whole grains.

PREPARATION:
Place rice, coconut water and salt in a medium pot and bring to a boil. Cover pot with tight lid and reduce to simmer. Cook 40 minutes, or until most of the water is absorbed. Uncover pot, and increase heat so that rice remains at a simmer. Continue to cook, stirring occasionally, until pudding is thick and rice is tender (but still al dente), about another 10-15 minutes. Take pudding off heat and cool to warm or to room temperature; stir before serving.

Fall… that beautiful, transitional time of year where the leaves lighten, the air crispens, and a great bounty of foods come ripe for harvest. For many parts of the country, it is also a perfect time to venture out of the home and spend the day at a State Fair.

As a child, I can remember glorifying fairs as enormous worlds of great wonder. When my parents took my little brothers and me, we would work our way through crowded agricultural buildings just to see the various farm animals and endless 4-H displays. In the amusement park section, we’d toss coin after coin at little bowls in hope that one would finally score a big stuffed animal, then later quickly forget our losses on loopy rides that made our heads spin and legs weak.

And then there were fair food goodies: the popcorn, the candy and caramel apples (caramel was my personal favorite), and the snow-cones. Of course, we could never leave the fair without us all splitting a bag of cotton candy…

How times have changed.

This fall, I was able to make a visit to the North Carolina State Fair in Raleigh/Durham, North Carolina. It seemed a nice idea to see a fair again, though now through the eyes of an adult.

At the North Carolina State Fair there were still prizes to win and amusements to ride. But gone were the crowds at the agricultural buildings; the lines had moved over to the booths of the food vendors. And while the food trailers did still use the same flashy lights and fancy signs of years ago, seeing what they were peddling made my body freeze and my heart jump.

At the fair these days, everything, and anything, is deep-fried.

I had already heard mention about the deep-fried Candy Bars (and we can all thank Scotland for inventing that artery-clogging concoction). Deep-fried Oreos are becoming legendary status. But Macaroni and Cheese???

Yes, indeed, as painful as it is to report it, Mac ‘N Cheese deep-fried is also a current fair-goers’ favorite, along with deep-fried Twinkees, Ho-Hos, PB +J (peanut butter and jelly sandwiches), PB and Banana sandwich, pecan pie, cheesecake, ice cream, Honey Buns, and Chips Ahoy cookies. I even found- brace yourself- bacon dipped in chocolate and deep-fried. It’s madness.

And often these sugar-fat bombs are being washed down with a quart to a half-gallon sized soda (in a souvenir cup, of course.)

Most disturbing is how these modern day treats are high calorie, nutritionally empty and heavily processed. This stuff is nothing like the fair foods of the past (wow, did I just sound like someone’s grandmother here?) Seriously, in the middle of a candy apple you find- an apple. Snow cones are mostly ice with a little flavoring and sugar added. Though often covered in too much salt and oil, popcorn is still a whole grain and does contain some beneficial fiber. Even cotton candy, while it is spun sugar, whatever size you decide to buy of it, your bag is still mostly filled with air.

According to the Centers for Disease Control and Prevention, “American society has become ‘obesogenic,’ characterized by environments that promote increased food intake, nonhealthful foods, and physical inactivity.”

Well, when the CDC came up with that statement, it may have been while watching fair patrons eat the latest edition to the fair sandwich lineup- the Krispy Kreme Bacon Cheese Burger: a greasy cheeseburger patty & bacon strips served within a glazed Krispy Kreme brand donut. As a side, they also have Cool-Aid pickles (cucumbers pickled in a Cool-Aide brine so that they are super sweet-tart).

I wouldn’t dare consume any of it. Eventually I did encounter a woman much, much braver than I who would eat what I now dub the “Sugar Burger.” (She did skip the pickles; I don’t blame her.) I asked her for her opinion of the sandwich.

“The problem with it” she informed me, “is that the donut is so sticky from the sugar, and at the same time the burger is so greasy, that you don’t know where exactly to put your fingers to hold it.”

Hmmm… “How to hold it” is the big problem here?!? Actually, on second thought, that may be close to correct, but I think it is better worded as “How long and where exactly will your body hold that 700+ calories after the burger’s consumption?” Over half the Sugar Burger calories come from fat; since fat calorie intake in general should be around 25% of our total calories, then percentage wise the Sugar Burger contains more than double the fat of what we should consume in a meal. In fact, at about 460 fat calories, that is more than enough to cover an average person’s fat intake needs for an entire day. Plus there’s no fiber, excessive sugar and little nutrients. But it does come with the bragging rights that you dared to eat one…

In quest of a healthier food option for myself, I eventually came upon a Greek food vendor and bought an order of stuffed grape leaves. Grape leaves stuffed with rice and seasonings can’t be too bad, right? (Although, I admit if it was prepared in my kitchen I would have used brown rice instead of white to up the fiber content.) As I walked off I took a bite, and quickly felt confusion- my grape leaves were so greasy, hard and crunchy on the outside! Then it hit me: apparently fair vendors also think it’s a good idea to deep-fry stuffed grape leaves. Ugh. It was a bad idea. Very, very bad.

It frightens me that today’s children could be glorifying this current fair “food,” just as i did to the fair foods long ago in my own youth. But maybe i am being to critical. Anyways, it can’t get any worse, right? Well…

Some say the biggest of everything is found in Texas, and they sure take the blue ribbon when it comes to their fair food piling up the fat. Freelance writer K. K. Thornton reported in Health & Wellness magazine on the newest rage over at the Texas State Fair… Deep-Fried Butter! That’s right- folks are lining up to buy a chunk of fat that’s battered and deep-fried in more fat. Even worse, after they buy it- they eat it. I really think I feel my arteries thicken up a bit just reading about this stuff.

Say, does Deep-Fried Butter come with a side of melted butter for dipping? Or, perhaps a scoop of lard chutney for a fancy-pants garnish? If not, I could be on to next year’s craze…

I think I will take a pass on Texas State Fair’s newest “delectable.” Instead, I will camp out in my own kitchen and prepare my own burgers, macaroni and cheese, and stuffed grape leaves. Maybe I will even whip up a cheesecake. Never will I choose to use the deep fryer. And everything will still taste great.

By making the choice to try to not overeat fats, my arteries will benefit, and that’s quite a gift to my health down the road. And to be blessed with the understanding of that choice is a much bigger win than what any coin toss game could ever provide me.