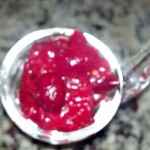 At every Thanksgiving dinner two dishes have always appeared on the table- roast turkey and cranberry sauce. I remember as a child the many hours spent by my family on preparing the big bird, roasting it, and then ceremoniously slicing it up onto the fancy turkey platter. The turkey even had its own special stuffing and gravy. As for the cranberry sauce, well… the only things needed for its prep was a can opener and a bowl to dump it in (hopefully my Nana and Mom don’t get too upset over my divulging this info, but on the other hand, I think back in the day most holiday tables used this same “technique” for cranberry sauce.)

For this fresh version, I actually adapted this recipe from a one that appeared in a Food & Wine magazine over a decade ago. Unfortunately, I do not have that November issue anymore and cannot remember the original chef’s name (I think he was from Washington State). Among several differences, his version included champagne vinegar, which is delicious but super expensive. Mine uses apple cider vinegar, which is an ingredient much easier on the wallet.

This dish has been a family favorite for years at my Thanksgiving and Christmas dinners. Try this recipe out for yourself at your next holiday- your guests will love it, plus your can opener will appreciate the rest.

PREPARATION
In a large, deep pan, heat the olive oil on medium high heat. Add the shallot and ginger and cook until the shallot is softened, about a couple of minutes. add the orange juice, sugar and cinnamon stick, stir until the sugar dissolves, then simmer until the orange juice is is reduced by about third (about 5 minutes). Add the orange zest, cider vinegar, cinnamon stick and cranberries to the pan and cook the cranberries until they completely burst, about 12 minutes. Take the pan off the heat and let the chutney cool.

In a small, dry fry pan add the mustard seeds and toast over a medium heat until the seeds become fragrant, about a minute. Make sure to move the seeds around in the pan as you cook them so that they cook evenly. Add the toasted seeds to the chutney and stir so that they are evenly distributed.

When the chutney is completely cooled, remove and discard the cinnamon stick.

Makes about 4 cups of chutney.